Definitions of music usually include a statement to the effect that music conveys emotional and/or aesthetic meaning to listeners. But, what is this? To understand what this meaning might be, one has to consider how people process musical sounds. The human brain organizes sounds in patterns. This organization might be a series of tones moving linearly in a scale or a group of tones that repeats. It also could be tones heard simultaneously in chords or clusters. Apparently the brain does this in an attempt to create predictability of future events. Regardless of the motivation, the patterns we perceive due to our brains' activities are meaningful. But, is this activity emotional or aesthetic. "Emotional" we understand. What is "aesthetic?" The philosopher Emanuel Kant talked about "aesthetic" as being an attitude of intensified or enriched experience that is disinterested (devoid of practical interest). Thus, whereas "emotional" and "aesthetic" overlap in some regards, "aesthetic" refers primarily to an intense experience that is self sufficient in itself, and "emotional" refers to an experience that affects our basic emotions: fear, pleasure, sadness. 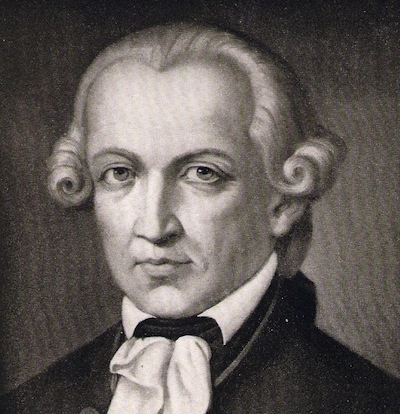 The German philospher, Immanual Kant, is a major figure in modern philosophy. He was the first philosopher to incorporate a theory of the arts and creativity into his general philosophical system.

So, how do we get from the perception of sound patterns to emotional or aesthetic experiences? First of all, the perception of patterns seems to be a satisfying experience for us. Whether conscious or subconscious, the recognition of patterns causes relatively evenly flowing brain waves and a sense of satisfaction. Then, we all know that sudden, loud sounds (the blaring of a truck horn, for example) causes surprise, even fear. Quiet, repetitive sounds such as the sound of waves rolling onto a beach on a still night cause a sense of peace and wellbeing. These are emotional reactions to sounds. Sounds also can remind us of other experiences like Proust's hero in Remembrance of Things Past is reminded of important moments in his life by the smell of macaroons at a coffee shop. Such reminiscences can be profound experiences. Many of these are learned or conditioned responses such as a kiss suggesting physical pleasure. Finally, our conscious brains tend to make sense out of things. We take patterns that we perceive and organize them. It is a fundamental aspect of language or game playing, for example. One's success in understanding the organization of something provides great pleasure.

Composers intuitively understand these things and create music with an abundance of building blocks that emphasize patterns and often suggest non-musical experiences. A listener's brain takes in the music and then translates it into electro-chemical patterns, which can arouse emotion and/or create a puzzle that the conscious brain solves, usually to our delight. This process, then, opens the door to highly meaningful experiences for the listener.

Philosopher and student of Aristotle who gave us most of what we know today about the music of Ancient Greece through his treatise "Elements of Harmony." in the 4th Century B.C.E. down to the present the notion that pulse or beat in music derives from a basic bodily pulse has remained fundamental. A relatively relaxed metronome beat of 66 is similar to the constant beat of a healthy heart at rest. Constancy of pulse in music, then, reminds us that music has life, that it is vital. When we perceive a meter (a regular repetition of a pattern of strong and weak beats) layered upon this pulse we begin to recognize a depth of patterns that is deeply satisfying. 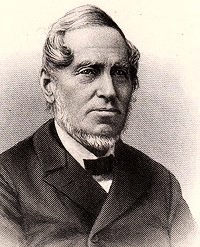 There are many verses to "My Country, 'Tis of Thee." Written by Samuel Francis Smith, below are the first four most commonly printed in hymn and song books.

My country, 'tis of thee,
Sweet land of liberty,
Of thee I sing;
Land where my fathers died,
Land of the pilgrims' pride,
From ev'ry mountainside
Let freedom ring!


My native country, thee,
Land of the noble free,
Thy name I love;
I love thy rocks and rills,
Thy woods and templed hills;
My heart with rapture thrills,
Like that above.


Our fathers' God to Thee,
Author of liberty,
To Thee we sing.
Long may our land be bright,
With freedom's holy light,
Protect us by Thy might,
Great God our King.

A song everyone knows is "My Country, 'Tis of Thee," or "God Save Our Gracious Queen" or "God Bless Our Native Land" (good songs tend to be recycled). Almost everyone who sings this song will start out singing with a pulse of about 88 metronome beats/minute, a good walking beat or an Andante tempo. Try singing "My Country, 'Tis of Thee" fast or at a very slow tempo. It just does not make sense. Part of the reason why it needs to go at an Andante tempo is conditioning and the meaning of the text. We have heard it many, many times and the words have some importance to most of us. But, part also lies in its construction. We recognize this music as a song tied to relatively simple chords that regularly change. If the pulse of the music is too fast, a singer or listener cannot make sense of the changes in the chords; too slow and the simplicity of the chords becomes dull. The piece also consists of six short phrases

A phrase is a melodic statement which can give a feeling of a complete idea on its own: similar to a sentence of prose. or melodic ideas that correspond to the phrases of the text If it goes fast, the sense of the phrases becomes lost; if too slow, the shape of the phrases is too weak and the overriding symmetry of the organization of the phrases too strong to maintain interest in the song. There is a "correct" beat for this song, then, that is consistent throughout and we recognize it. In relation to the resting heartbeat of 66 beats/minute it is a little more energetic, perhaps even showing pride, but certainly not racing. This is perfectly in line with the message of the song.

A pattern, also, is clearly evident in the way the melody is constructed. The first five phrases all are six beats in length. The sixth phrase is double that length, or twelve beats and closes out the song. If we look at the first three phrases, we see that the shape of each phrase undulates slightly, but the first tone of the first phrase and the last tone of the third phrase are the same. The pitch level has remained steady. So, the first phrase dips slightly, then rises slightly above the beginning pitch. The second phrase, which begins one tone higher than the end of the first phrase, continues to rise slightly, then dips below the phrase's beginning pitch. The third phrase begins one pitch higher again than the pitch on which the preceding phrase ends, but dips to end on the tone on which the first phrase began. Thus, although there is movement in each of the phrases, they are all patterned symmetrically and the first half of the piece begins and ends on the same tone. The second half (beginning with "Land where my fathers died") begins relatively high in pitch. The fourth phrase descends in a stepwise motion after several repeated notes. The fifth phrase begins one tone lower than the fourth phrase did and then moves in exactly the same way. The sixth and last phrase begins one tone lower than that of the fifth phrase, but then moves up a step, then down in a line of tones, then rises in another line to the highest tone in the song before immediately plunging in another straight line to the concluding tone, which happens to be the same tone with which the song began.

What is the meaning of this very tight organization? Does it confer any aesthetic or emotional meaning to the song? Several things are apparent. First, the regularity of the length of the melodic phrases in six-beat units (the last phrase 12 beats) establishes a pattern that is comfortable and memorable. The similarity in the way the first three phrases are constructed also adds to the degree of comfort. Then, the descending patterns of the fourth and fifth phrases that also start relatively high signal a new pattern that creates surprise and interest. The last phrase, which climbs to the highest tone in the song and then immediately drops, brings the piece to a climactic level just before it ends. Finally, the fact that the piece begins and ends on the same tone creates a stability and certainty that brings some satisfaction.

"My Country 'Tis Of Thee," then is full of patterns. The most obvious ones are rhythmic and melodic patterns, but it is also filled with harmonic patterns. Taken together – the basic pulse, the regular meter, the length and shapes of the melodic phrases as well as the way in which phrases are juxtaposed against each other – all of these things create a balance that makes the song satisfying in itself without the text. This is aesthetic meaning in a very practical format.

Sing "My Country 'Tis Of Thee" to yourself and notice the rhythm and organization of the melody. Also, listen to the first section, the Theme, from the first movement of Mozart's piano sonata in A Major, K 331, to experience a similar sense of patterns in a very different kind of piece.